So for the past four weeks in my spare time, I’ve been writing a sweet web scraping application for a personal research project. After overcoming the majority of regex and pattern matching challenges, I was finally able to get my spider a crawlin’ and then go to bed.

When I woke, I was excited to see what little bits of interesting information my application had found. But instead, I saw that it had dumped stack. And as a Ruby newb, here starts the long and arduous journey to understanding how to profile a ruby application. Yikes!

Definition of “Memory Leak” in Ruby

From what I have researched and my own personal experience. You (the developer) can’t really create a traditional memory leak.

Thats the basic difference (from my understanding). Please correct me if I am off on something.

Tips To Identify That You Have A Memory Leak

So a couple quick ways that you can tell you could have a memory leak.

Monitor the Process I.D. (PID) of your application and look to see if memory usage increases over a given period of time. Should it continue to go up, this would strengthen the argument that you have a leak.

Again, these are two quick methods I used to come to the following point of action.

“Crap, it looks like something is going on with memory usage, I better take a closer look.”

Try forcing your Objects to release

I learned rather quickly, that by design, Ruby does not allow you to release or unset your Objects manually. So there ya go.

I tried this while grasping at straws, it was a dumb idea. I was taking shots in the dark and I wouldn’t advise going this route. What I needed was a really deep look at what Objects I was storing in memory so I could develop a story on why my application was leaking.

This is when I happened across the git repo Memprof by Joe Damato (@joedamato http://timetobleed.com). It was exactly what I needed.

memprof.com (be aware, that when using this tool, it publishes your code to the web)

Include Memprof (at the VERY beginning of your application, just in case you want to profile your included gems too)

Find Your Process ID of application

After 5 minutes, Dump Trace To Memprof.com

Analyze the heap visually with Memprof.com 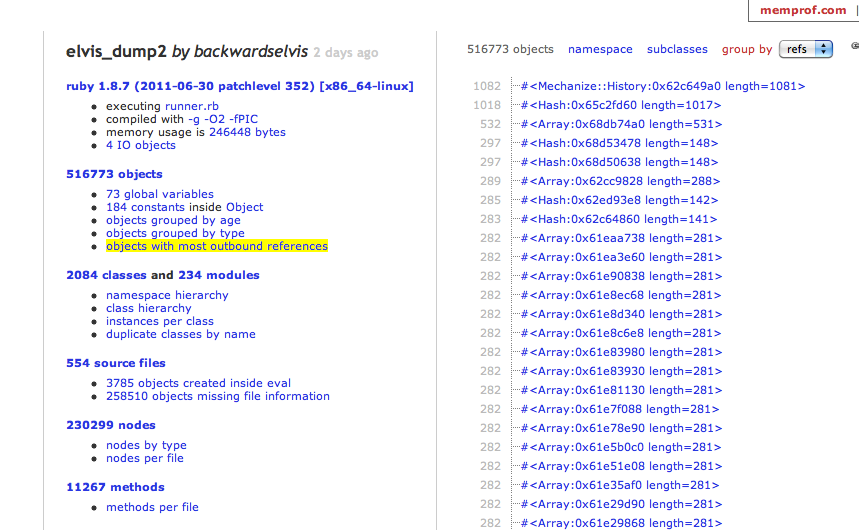 On the far right, you will see an Object with the “Mechanize” class, and its length is 1081. This piece of information was critical in identifying that a Mechanize object I had instantiated was retaining a crap pile of objects.

What was the issue?

So it turns out that by default, Mechanize does NOT set a max_history=() value. What does this mean? Basically, my web crawler was storing every visited page, in memory, in entirety. BEWARE!

Note: My “Ruby Memory Leaks” definition is not entirely correct, but for the newbs out there reading this, I think trying to break it down further could potentially confuse you. If you want to understand Ruby memory allocation at some point, go watch this video by Joe Damato. (link)